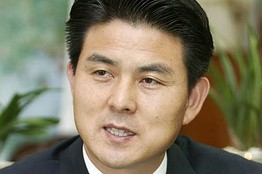 The shake-up is the biggest in number of new administration leaders during Mr. Lee's tenure, though it involved none of the major ministries.

He appointed Kim Tae-ho, former governor of South Gyeongsang province in the southeast of the country, to the office of prime minister. He succeeds Chung Un-chan, an economist and former university president, who took office 11 months ago.

Mr. Chung led an attempt to block plans to move half the national government to a new city, an effort that Mr. Lee supported. But the National Assembly rejected the idea in June, giving the green light to the move and, under Korean political tradition, putting Mr. Chung's job on the line.

Mr. Kim, 47 years old, will be the country's youngest prime minister in almost 40 years and the youngest appointee to a ministerial job by Mr. Lee. A presidential spokesman touted the appointment as recognition by Mr. Lee that his administration has appeared out of touch with younger Koreans.

The new minister for special affairs, a hybrid post that deals with politics and broad strategies, is Lee Jae-oh, a longtime aide to the president who was recently elected to the National Assembly from a district in Seoul.

South Korean presidents typically make changes to ministry leadership once or twice a year. Sunday's move was the fourth major shuffle by Mr. Lee. Analysts said it appeared routine and unlikely to result in any major policy changes.

Write to Evan Ramstad at evan.ramstad@wsj.com